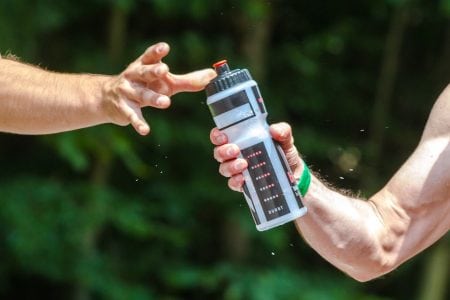 Every day the body should receive a sufficient amount of fluid for its normal functioning. Therefore, doctors, trainers and nutritionists recommend consuming more clean water. It helps to maintain the water-salt balance in the cells, facilitates the work of the cardiovascular system. Especially important is the use of water for people who perform dynamic exercises in training. Intensive motor activity and high physical activity lead to increased sweating. Accelerated and deep breathing during fitness classes also contributes to a large loss of fluid. As a consequence, the balance of liquid and trace elements in the body is disturbed, the blood becomes thicker, the load on the heart increases significantly. Therefore, the body needs hydration – maintaining and restoring the body’s water balance during any training. The athlete should use a volume of fluid approximately equal to that which the body lost with sweat, breathing and urine, performing, for example, racing exercises.

The use of water in performing dynamic exercises

Long running training is one of the most dynamic and debilitating types of exercise. When running for long distances, the body undergoes significant loads, while losing a large amount of fluid that goes along with sweat and breathing. The volume of the lost fluid will be different for each person – this is due to the individual characteristics of the body. It’s no secret that some people sweat more than others. Therefore, you should determine your norm for replenishing lost fluid during fitness classes. On average, with long races, professional athletes drink water every 20-25 minutes for 200-300 ml. It should be borne in mind that the natural mechanism that reports a significant loss of fluid, namely, a thirst, may be delayed.

The loss of fluid is influenced by the conditions in which a person performs physical exercises. In hot weather in a dry climate, sweating is more active. In such conditions, sweat quickly evaporates, controlling the amount of fluid lost becomes more difficult.

Factors that affect the amount of fluid lost during running exercises:

That’s why at large cross-country competitions, you can notice a lot of sites where athletes can drink water.

Calculation of the individual water norm when performing physical exercises

As already mentioned above, the volume of fluid lost from sweat is individual for each person and depends on many factors. Given these factors, as well as the body weight before and after running exercises, you can determine the optimal rate of drinking water to restore the body’s water balance.

The following data should be considered:

You can use water during exercise several times in small portions, or rarely, but in a larger volume.

Separately, we should focus on restoring the water-salt balance after a long running training session. Some experts believe that after you have completed intensive physical exercises, you should refrain from drinking water for 30-40 minutes. This will significantly improve the overall endurance of the body, and during this time the work of the cardiovascular system will normalize, respiration will be restored.

Other experts recommend using water immediately after training. Dynamic fitness classes, and especially running, lead to a significant loss of fluid. In some cases, the body can lose up to 3 liters of fluid, which will create a serious threat to the health of the athlete. A number of important internal organs begin to experience an acute shortage of fluid, the load on the heart increases significantly. But to drink water immediately after training should be correct.