A group of researchers from the USA and Germany, having studied the isotopic composition of several iron meteorites, was able to determine for the first time the age of Jupiter. They believe that because of the early birth of this gas giant, the Earth, Mars and Venus have relatively low mass. 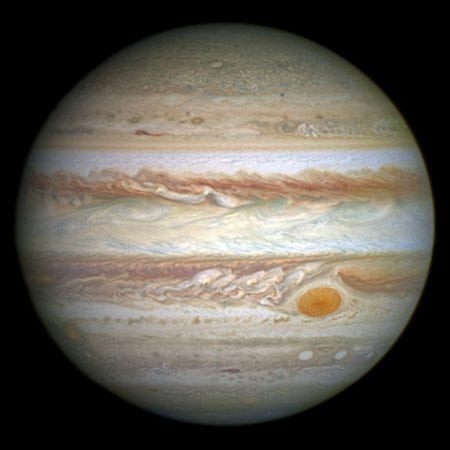 According to existing models, the Solar System was formed 4.57 billion years ago: first the Sun formed from a huge molecular cloud, then the planets began to appear, sintering from gas, dust and small asteroids. Jupiter was formed before other planets, but it remained unknown how long this process took. At the same time, such a giant as Jupiter should have significantly influenced its gravity on the composition and architecture of the protoplanetary disk and, thanks to this, largely determine the characteristics of the inner planets of the Solar System.

To find out when and how the largest object of the Solar System was born, scientists from the National Laboratory of Lawrence Livermore, led by the German planetologist Thomas Kruyer from Münster University, turned to its smallest objects – meteorites. They lent 19 rare iron meteorites from the museums of London and Chicago, from each meteorite they took a gram of matter, dissolved samples in nitric and hydrochloric acids, isolated tungsten and molybdenum from solutions and began to study the isotopic composition of these metals.

The isotopic composition of meteorites divided into two groups: one formed closer to the Sun, the other – further away from it. Both of them were formed from the material of the protoplanetary disk in 1-4 million years after the beginning of the formation of the Solar System, but scientists believe that the protoplanetary disk has divided the orbit of the already appeared nucleus of the future Jupiter.

And since Jupiter did not let in the outer part of the matter of the protoplanetary disk inward, closer to the Sun, less than a lot of building material was left to the planets in this area, and therefore, the researchers believe, there are no so-called Super-Earths in our planetary system.

The results of the research are published in the journal PNAS